Where was this brute hiding when we were there? 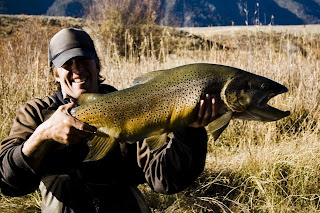 Madison Brown Caught 10/28/2008
photos by Grizz
Measured 32 1/2" by 18 1/2"...the math says it's 13.9 poundsRod
Echo 9' 6wtFly
Bennet Stone (A.K.A Pat's Stone/A.K.A Rubber Legs)10-12lb Leader
The Story:
So many things were going through my mind.... I spotted the large fish holding in the tail end of the run. The first cast produced a swipe at my fly. The second cast I saw "jaws" swipe at it... a different fish? Must be. This was confusing... what size are these two fish? Perhaps the first fish I saw was not 20" but really 10" and the second fish is the 20 incher? Another cast produced...drum roll... nothing. I thought about the situation, then thought about it again. I have a sink-tip on and a large streamer, damn. I thought about switching colors, reels, lines, tippet, leader and a hundred other things. Thinking I was faced with a large 22+ fish I didn't want to blow it... If I would have know it was 32" I would have blown it for sure ; ) I left on the sink-tip, didn't bother with an indicator and tied on a SJ worm figuring it's a probable take. I cast up stream and set the drift....rejected. Sh#$! Now what, should I make another cast? Change the fly? I opened my box and grabbed a Bennett Stone (A.K.A Pat's Stone / A.K.A Rubber Legs). A good drift produced.... a spook? Sh#$!! Damn!! F*^@!!!! The spook turned out to be more of a move, slightly over and up to the left, I can see it holding. To hell with it, I made another cast and drifted it down. The fish nonchalantly moved its head slightly over, did it take it? am I tight? what happened?... I set the hook. Nothing happened. I pulled again felling resistance but nothing happened. Am I snagged? A good hard tug awoke the beast. I now realized that this 20+ inch fish might be a little bit bigger, because it was running up river at will. The fish stopped at a near by snag before turning around for a run downstream. As it ran past me I saw the actual size. I believe I yelled "help" out loud : ) Not really sure why but I remember thinking how am I going to land this thing by myself, but I managed. The fish tried to do everything you can think of to get free. I would love to tell you that the fish fought for an hour but it was around 5 minutes. When it came to hand I realized how big this fish really is. Grizz called it a "Trophy's Trophy, it's what trophy Trout want to grow up and be". We were both so happy to see such a beauty. Truly a humbling experience.... Truly a fairy tale.... Oh how I love the Rockies.
I was shaking uncontrollably for awhile. A million thoughts were going through my head. Coming back to Rocky Mountain Trout after a Salt Water stint I feel its finally come full circle. This fish is what I have been dreaming about my entire life, since I was a Kid... actually I think I was dreaming of a smaller version of this fish but this will surely do. I never thought it would happen and honestly, a part of me didn't want it to for fear that the search would end. I enjoy the search more than anything, its actually what drives my fishing, my vision, my life. The finding part is supposed to be small teasers luring you back again and again, never to end. This is a Trout of a lifetime. I was at a loss for words then and still am now.... I am so stoked and on the river I almost cried.
Posted by Coach at 9:44 PM

Labels: Crap from the Interspace

A Minion is one who is highly esteemed or favored.

A Blackguard is low, a thoroughly unprincipled and contemptible person, prone to foul language.

A Mountebank ensnares or prevails over through trickery.

Does following the Minions make you a Lackey?